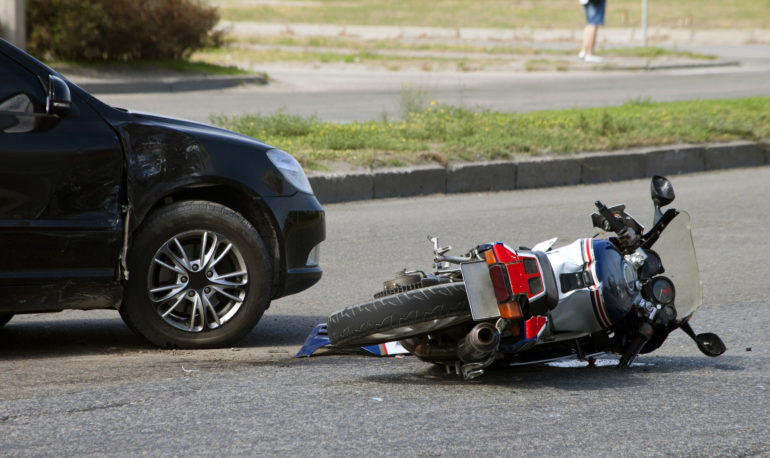 This is the third in series related to motorcycle accident reconstruction. These are topics Legal Ride consults with other attorneys for and assist in cases around the country as far as putting together a strategy to defeat defense experts and the police in their efforts to reconstruct motorcycle accidents: The amount of property damage a motorcycle, or car, suffers in a motorcycle v. car accident has no bearing on the reconstruction or analysis of the case, although we have run across many situations where the police and insurance company wants to attribute speed to a motorcycle solely because of the damage to the bike or car. Cars have engineered crumple zones to absorb energy and to reduce injury. An engineer can examine a car after a collision and figure out the energies involved in creating any particular crush, so long as its in an engineered crush zone. This is called “crush analysis”. Motorcycles have no such engineering.

The closest thing we have to “crush analysis” on a motorcycle crash is the spoked wheels that motorcycles used to have, but which really went away starting in the late 70’s onward. Modern cast or forged wheels are not subject to a crush analysis, nor are motorcycle frames, suspensions or body work. Every collision is different and every set of damage to a motorcycle following a collision is different. There is zero scientific basis to look at property damage on a motorcycle and equate that to any sort of speed nor any other factor in an accident reconstruction. And same thing with the car. The crush zones on cars are engineered with an eye towards a collision with another car, which is to say, a broad object colliding with another broad object. A rear end accident for example is a perfect example of a “broad based impact” of one complete car bumper to another. However, a motorcycle isn’t broad, its what engineers call a “point impact” when a car hits a narrow object such as a motorcycle or a pole. There is no crush analysis on a car when it hits a pole or bike. Thats because all of the energy of the narrow object is focused on one point, and causes a lot more damage to that single point, then the equivalent energy would cause if it was dispersed across a broad area. There is no engineering significance to a point impact, no reproducibility nor analysis can be made of a point impact. However, that doesn’t stop police and insurance company experts from doing exactly that. And you don’t “beat” the police or a defense engineer without knowing the entire scientific basis for the summary above, which means a step by step deconstruction of the basis of their opinions. The police and defense engineers vigorously defend their positions. We had a case that went to trial last year where I spent more than 6 hours deposing the lead detective on the case before he gave me what I wanted, and more than 16 hours deposing the defense engineer before I got what I needed to exclude him at trial. Big property damage motorcycle accident cases tend to result in tickets to the biker bc of this lack of understanding by the police. The normal motor officer is simply not trained in these issues, and the engineers flat out resort to “frog and scorpion” tactics which a lot of attorneys fall for, bc they simply don’t know this subject matter, because their own engineers don’t know the subject matter, or because they simply don’t have the experience to take these experts down using their own language.

The next topic will be one more engineering/reconstruction issue worth discussing, the “vault formula”, and then future topics will loop back to the T-S-D blog we did before, and translate this to improving our riding to avoid accidents. These topics are critical in winning motorcycle accident cases, not just as far as defeating incorrect engineering analysis, but also overcoming jury bias based on their own experiences. A thorough understanding of these issues makes the difference between winning and losing your motorcycle accident case. If anyone has questions, I’m happy to discuss. I’ve spent the last 28 years honing these issues, and have still not yet had a defense expert be allowed to testify against us in a motorcycle accident trial.

If you are looking for an experienced trial lawyer who can help you with a motorcycle accident case call Legal Ride today.